Since 2012 I have worked for the State of California, currently as a manager at Secretary of State. I previously managed a policy unit for the Department of Health Care Services (DHCS). Before that I was the policy manager for the High-Speed Rail Authority (HSRA); the editor at the Department of Consumer Affairs (DCA), Office of Professional Examination Services (OPES); and a policy analyst at the Department of Social Services (DSS), Community Care Licensing Division (CCLD). I worked as a Japanese technical translator and trainer at NEC's semiconductor plant in Roseville, CA, prior to becoming a civil servant.

I lived in Fukuoka for 11 years, teaching English and related subjects as an Assistant Professor at two universities: Kurume Institute of Technology (KIT) and Fukuoka Jo Gakuin University (FJGU). Courses taught included Japan and America, Politics and Society, American Culture, Mass Media, Debate, and English for Science and Technology. I wrote academic articles for university journals and presented papers at regional, national and international conferences. I served on the editorial committee for the Kyushu-Okinawa Chapter of the Japan Association of College English Teachers (JACET).

For five years I was an Editorial Coordinator for The Asia-Pacific Journal: Japan Focus. Besides contributing articles and Japanese-English translations to the publication, I refereed, edited and wrote introductions for manuscripts submitted by other researchers. 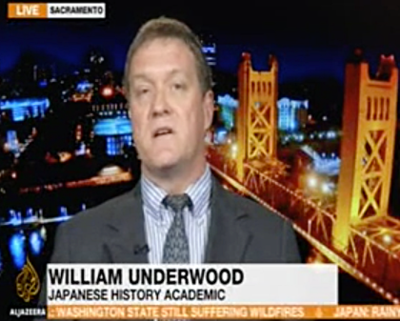 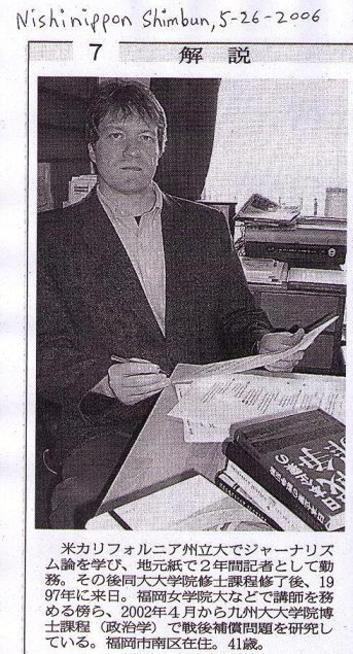 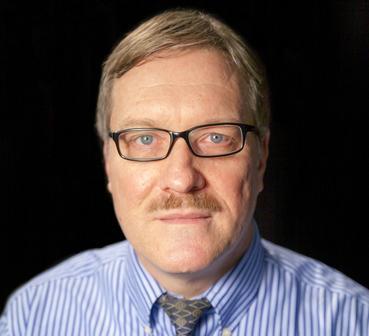 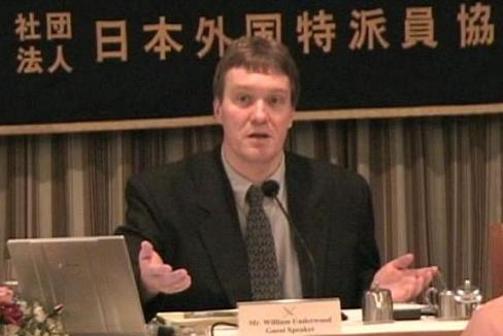 My first two years in Japan were spent in a scenic fishing village in Shimokita, Aomori Prefecture, where I taught English at junior high schools through the Japan Exchange and Teaching (JET) Program. Before that I worked as a reporter and editor for weekly newspapers in northeastern California, receiving statewide and regional writing awards. As a freelance writer I have contributed dozens of non-fiction articles to magazines, newspapers and online publications in various countries.

I am currently an independent researcher of the history of forced labor in wartime Japan and its 21st-century legacy. My Ph.D. degree in Political Science was received in 2007 from Kyushu University in Fukuoka, Japan. The dissertation described Japan’s use of forced labor during the Asia Pacific War and analyzed the reparations movements for Korean, Chinese and Allied POW victims within the context of the global trend toward repairing historical injustices.

My articles in The Asia-Pacific Journal: Japan Focus beginning in 2005 provided the fullest descriptions of forced labor and redress activities involving Korean and Chinese workers. I played a key role in compelling Japanese Prime Minister Aso Taro to admit in 2007 that Allied POWs worked at Aso Mining during the war.

I have spoken by invitation about my forced labor research at the Foreign Correspondents’ Club of Japan, Stanford University and George Washington University. I have presented academic papers on the topic at the annual conferences of the Association for Asian Studies (AAS) and the Midwest Political Science Association (MPSA).

I have been interviewed regarding forced labor redress by broadcast media including Al Jazeera, Australian Broadcasting Corporation, Korean Broadcasting System, National Public Radio and radio stations in Seoul and Busan. I have been interviewed by print media including the Associated Press, The Economist, Financial Times, The Guardian, The New York Times, Reuters, Voice of America and Yonhap News Agency. My articles about Japan’s wartime past have appeared in American Legion Magazine, Far Eastern Economic Review, The Japan Times, South China Morning Post, The Straits Times, YaleGlobal Online and elsewhere.